It is generally men who are interested in trains. The majority of philatelists and deltiologists are also men. So trains depicted on stamps and postcards are popularly collected. Well, there is no lack of material where North Borneo is concerned. 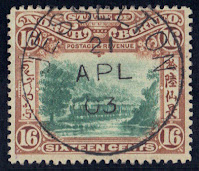 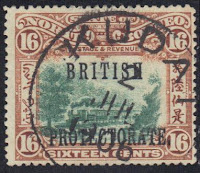 The first North  Borneo stamp depicting a train was from 1897 issue. 16c was a very unusual value and then it was overprinted in 1901 with British Protectorate.

It was also overprinted for use as a postage due even though I doubt there was much actual usage of this value. 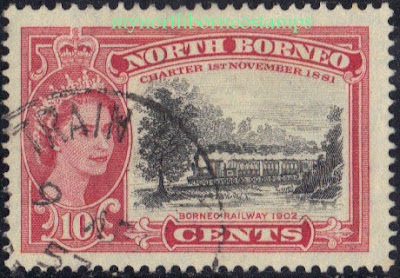 This was part of  issue in 1951 to celebrate the 75th Anniversary of North Borneo Company. It is very nice to have it with a train mail cancellation. I have seen a cover with this combination but unfortunately the cover was rather plain and I decided to wait for a better example. 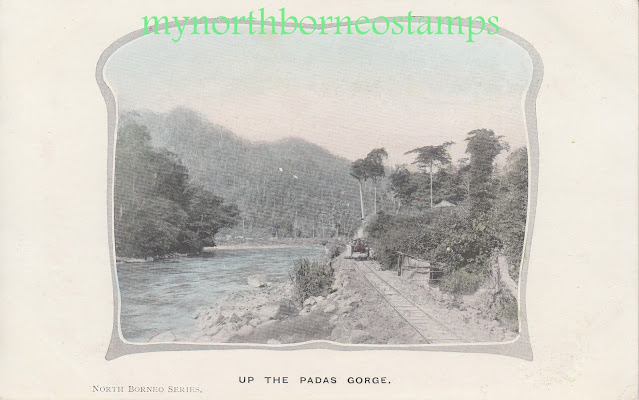 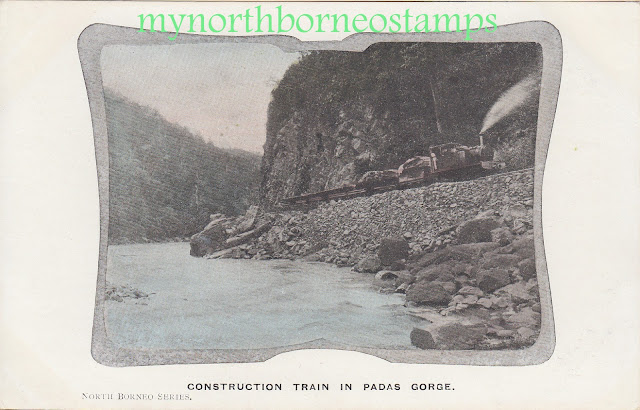 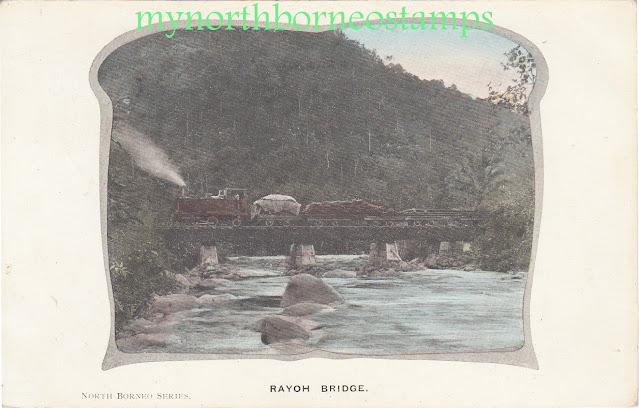 A series of North Borneo Government printed colour postcards showing the train in the early days of the railway. These cards are quite uncommon especially used ones. 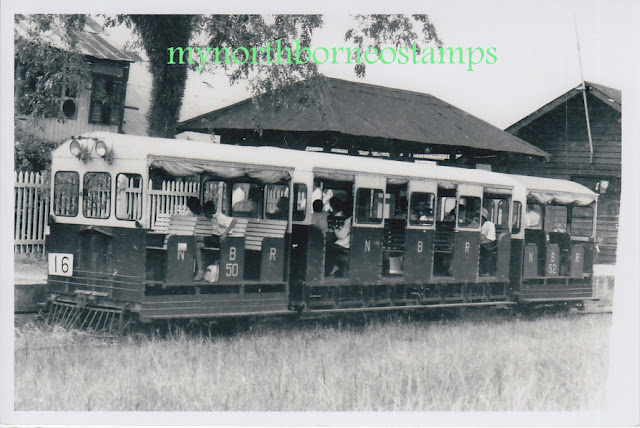 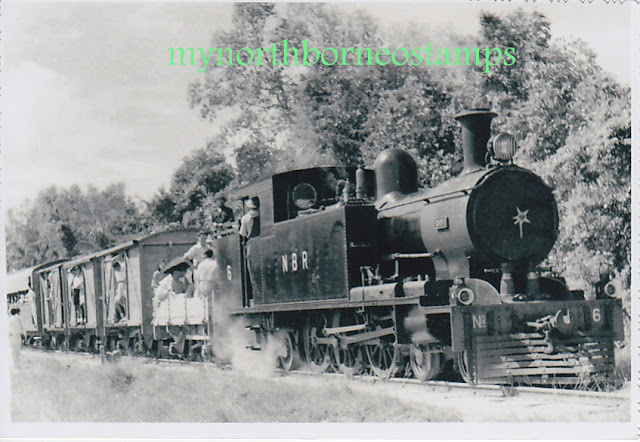 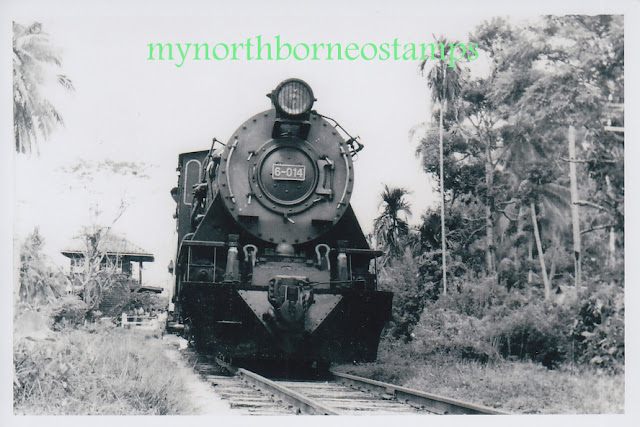 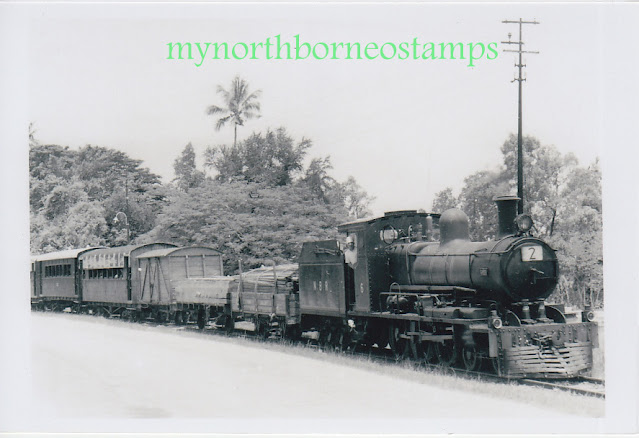 These are photographs expertly taken by CF Leong at the Happy Studio in Jesselton probably in the early 1970s. 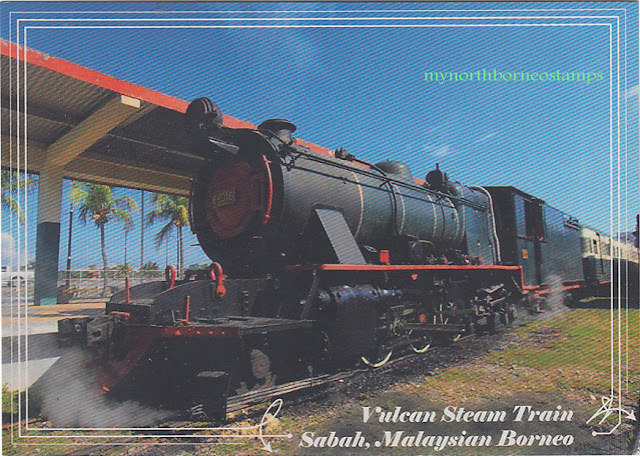 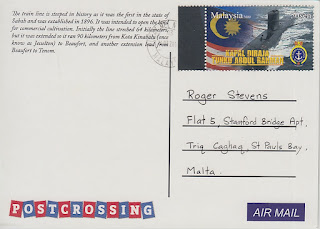 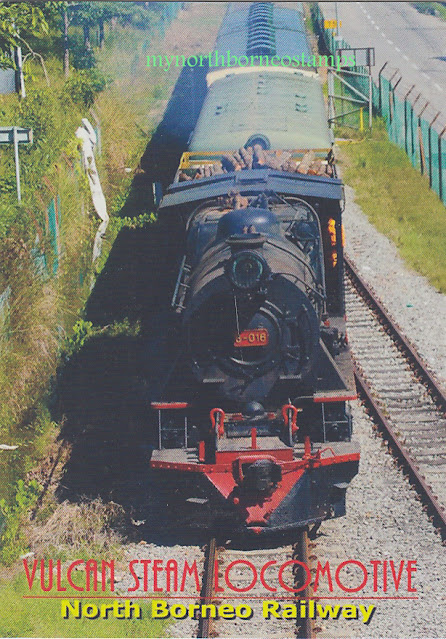 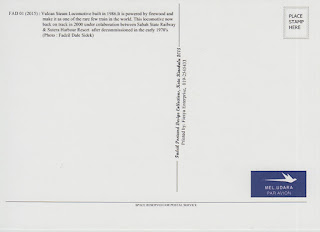 These postcards are relatively new but they may not be that common. This is the Vulcan Steam Locomotive 6016. They were delivered in 1956, built by Vulcan Foundry Ltd in Lancashire England. They were withdrawn from use in 1972 but luckily well preserved and currently back in usage for the tourist train to Papar. 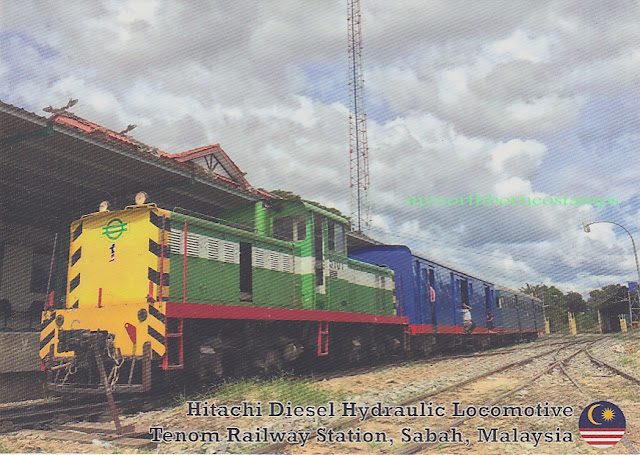 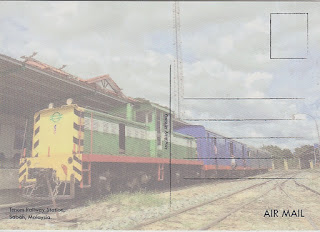 I think that the Hitachi Diesel locomotives are very functional and unattractive looking in comparison to the Vulcans. Diesel locomotives were delivered in 1968 to replace the steam locomotives. This Hitachi locomotive numbered 5101 was originally 6101, delivered in 1980. Around that time on a school sponsored trip, a group of us went with one of these locomotives up the Padas Gorge from Beaufort to Tenom. And then a few years ago, I took the journey in reverse from Tenom to Halogilat (half way to Beaufort) again with this type of locomotive with bare facilities but the views were good.
Posted by myNBstamps at 05:10 No comments:

The following cover was actually addressed to W H Elton's son. It was overpaid by 4c, 2c being the local rate. These philatelic covers were sold to collectors to raise money for building St Michael's Church at Sandakan. 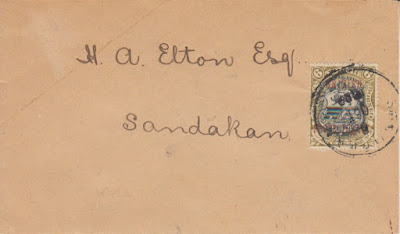 This was personally written by W H Elton in one of the colonial reports sent back to Britain:

I left home in 1888 my commission was to go as pioneer chaplain to the Officers of the British North Borneo Ser rice, and other Europeans in the State and to do what Mission work was possible besides among the Natives of the country.

On my arrival 1 made Sandakan, the capital, the head quarters of the Mission and made up my mind to occupy in the first instance, the three chief seaport towns viz. Sandakan, Kudat, and Labuan. The first year was spent in building a Vicarage, a temporary School- Church in Sandakan, in visiting the other stations on the Coast and in travelling up all the rivers to see the Planters and christen their children. At the close of the first year Mr. Richards arrived from home. He was the first Missionary to follow me to North Borneo.

By this time there was a considerable number of Chinese Christians in the Territory most of whom were located at Kudat, and it was arranged for Mr. Richards to take up work among these Chinese, and with this view he went to China for eight months to study the language. During his absence I went to Kudat and built a School-Church and two rooms of a Vicarage having promised him to have them ready for him on his return. It is interesting to note that it was the officers and men of the Navy who started these buildings in Kudat with a donation of $100.

While the buildings at Kudat were in course of erection the pretty little Church at Labuan, which had been built during Bishop McDougall's episcopate was burnt down in a jungle fire. As soon as I heard, of it I went to Labuan and built a School- Church in which the services have since been held.

During the year 1892 another worker arrived, Mr. Patrick, who was appointed, English Master of the Sandakan Boys' School, which by that time numbered fifty scholars of various nationalities, twenty-five of whom were boarders and formed the surpliced choir in Sandakan Church.

On the 29th September, 1893, an important step was taken in the laying of the foundation stone of the permanent Church in Sandakan by Governor Creagh, Five years had been spent in cutting down an immense hill at the back of the Vicarage, in order to obtain sufficient area for the Church. During those five years the late, Rev. Brynne Belcher had been collecting funds in England for a permanent Church in Sandakan and had remitted £50 a year for the purpose. I was about to begin a brick church when we discovered excellent stone within two miles of Sandakan, so we at once opened a quarry and determined to build in stone. Having obtained plans of a Gothic Church from a first-rate architect I began to instruct the Chinese in the art of building and by Easter Day 1898, just ten years after my arrival in the country, the Chancel, Vestries and Organ Chamber were completed at a cost of $16,822. It is interesting to note that this is the first stone building in Borneo, After ten years of incessant work without a change my health began to suffer, so after the consecration of the Chancel, I suspended building operations and went to England for a cooling. While I was at home I collected some money for the Nave and Transepts of the Church and these have now been in course of erection for four years and are about half finished.

Since my return from home ice have also been collecting money for a permanent Girls School and, thanks to the exert ions of Mrs. Birch, the handsome new building will be opened free of debt in about a month. So we now have three Boys' Schools and one Girls' School. All the education of the country is being carried on by the Church of England and the Church of Rome, the Chartered Company having not, as yet, opened any Schools.

The money for all these buildings viz. four in Sandakan, four in Kudat and one in Labuan has been raised by voluntary subscriptions amounting in all to $40,000.

Posted by myNBstamps at 03:45 No comments: